Sorry to anyone who got an email that I posted earlier – I pressed the wrong button and posted before it was ready!

The best part of being Catholic, Easter is just beginning!  Right now we are in the octave of Easter and then we go into the Easter Season, that’s right an entire season of Easter!

This morning we got up and went to breakfast at the Villa, then we took Mary out for the day with us!

We took the bus into town and walked to The Duomo.  Since we only saw the outside yesterday we wanted to go inside today.  Like Milan they have the Duomo separated into two sections (Visitors and Worshippers) and it cost money to get into the Visitor’s side.  We went through the Holy Doors of Mercy at the Duomo and prayed at the Blessed Sacrament Chapel for a bit.  Since we went in on the Worshippers side there were no pictures allowed.  But honestly there isn’t a whole lot to see inside the Duomo, they removed all of the art and statues and placed them in the museum instead of inside the church.  So the outside is really the part most go to see.

Doors on the Church 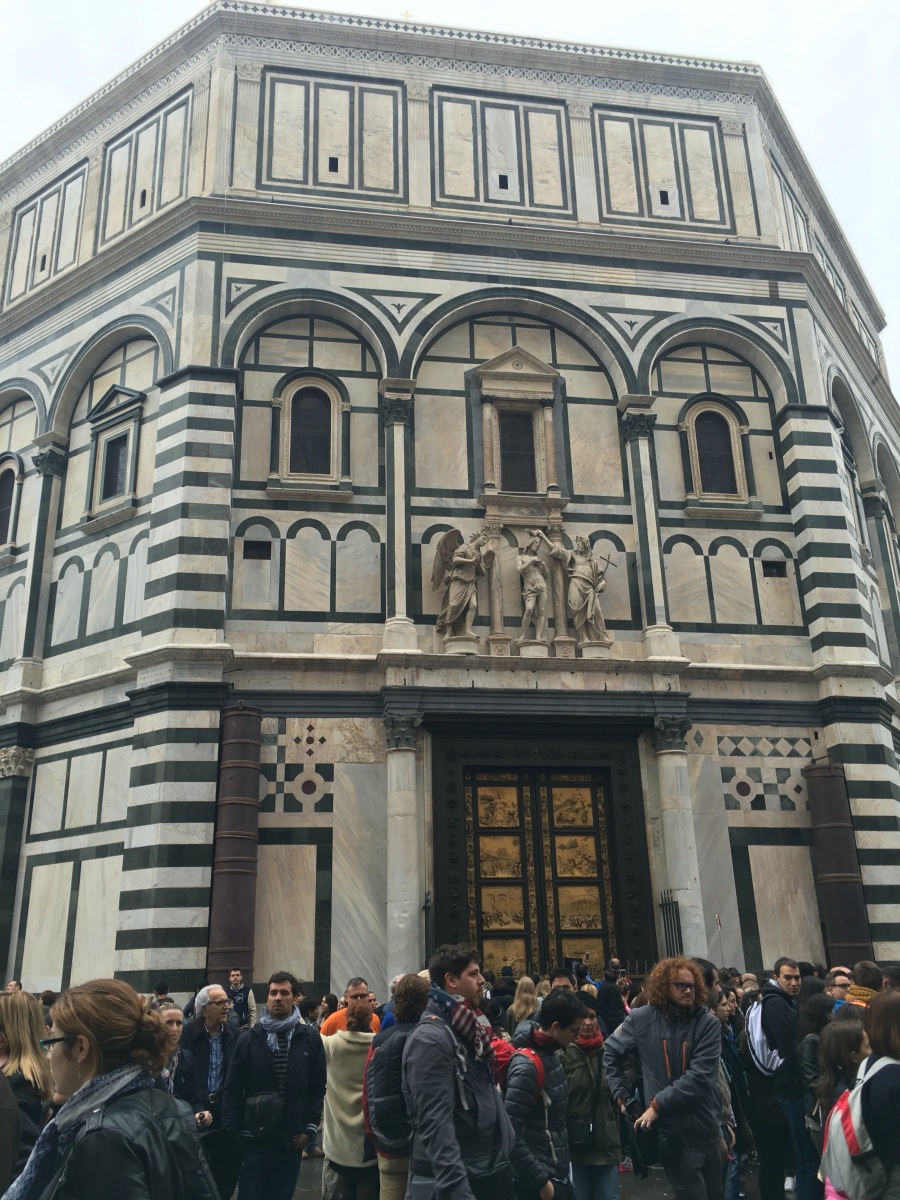 The Doors on the Baptristry

Fresco above the doors of the Duomo 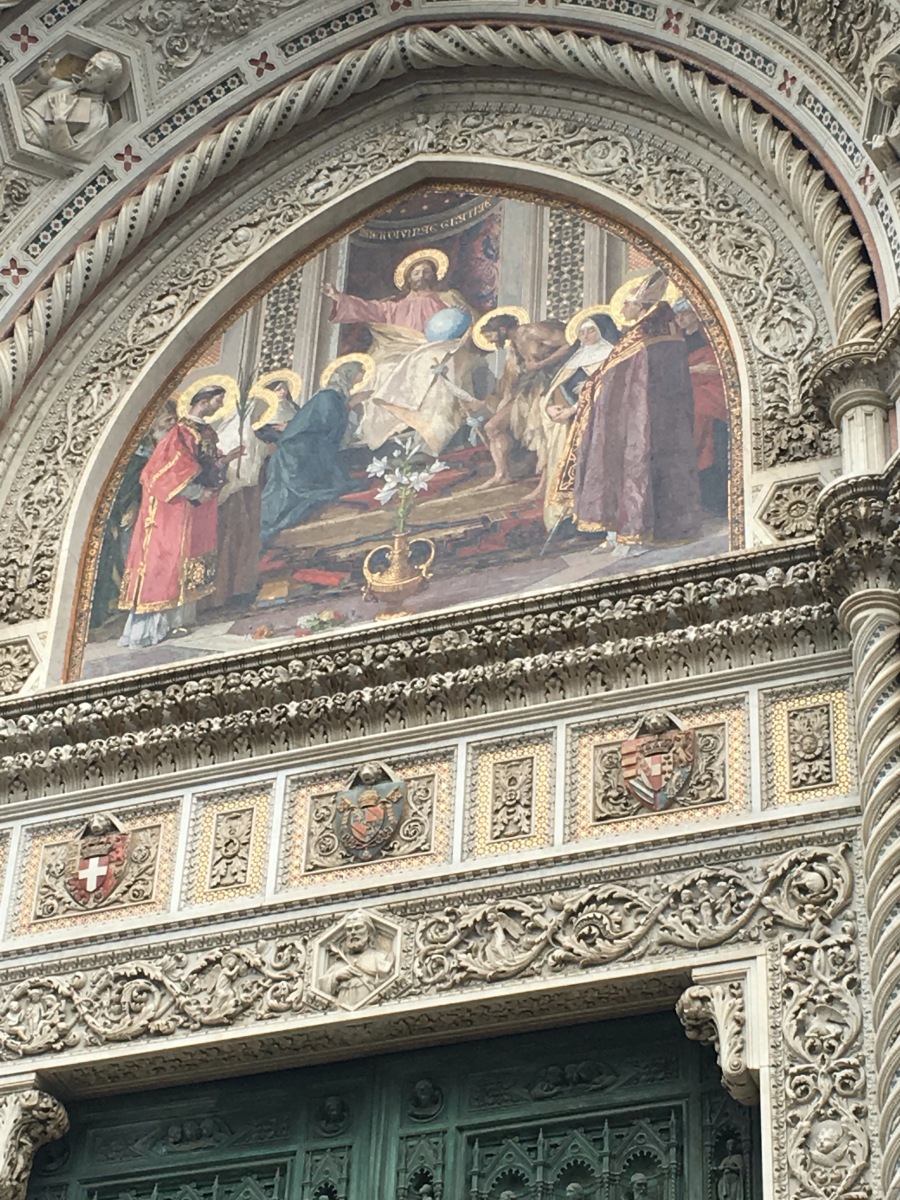 After praying for a bit we went back to the leather market.  Celina wanted to get a leather jacket and Mary wanted to get a scarf.  We were told to go to Massimo’s Leather Store if we wanted to ensure we got a good deal on a jacket and to be sure we weren’t getting ripped off.  So we went to Massimo’s which is just one block away from the leather market and Celina found a very pretty leather jacket for a very good price!  We went back to the leather market and Mary and I practiced the art of negotiating and we were able to get her a scarf that was originally €10 for only €7!  I also got a few silk scarves while we were there.

After the leather market we grabbed a quick bite to eat and then made our way to the Accademia for our 1:15 reservation into the museum.  There we got to see some fantastic pieces of art, including The David.  A lot of the paintings you cannot take pictures of in order to preserve them, but I grabbed some photos of the ones I was able to. 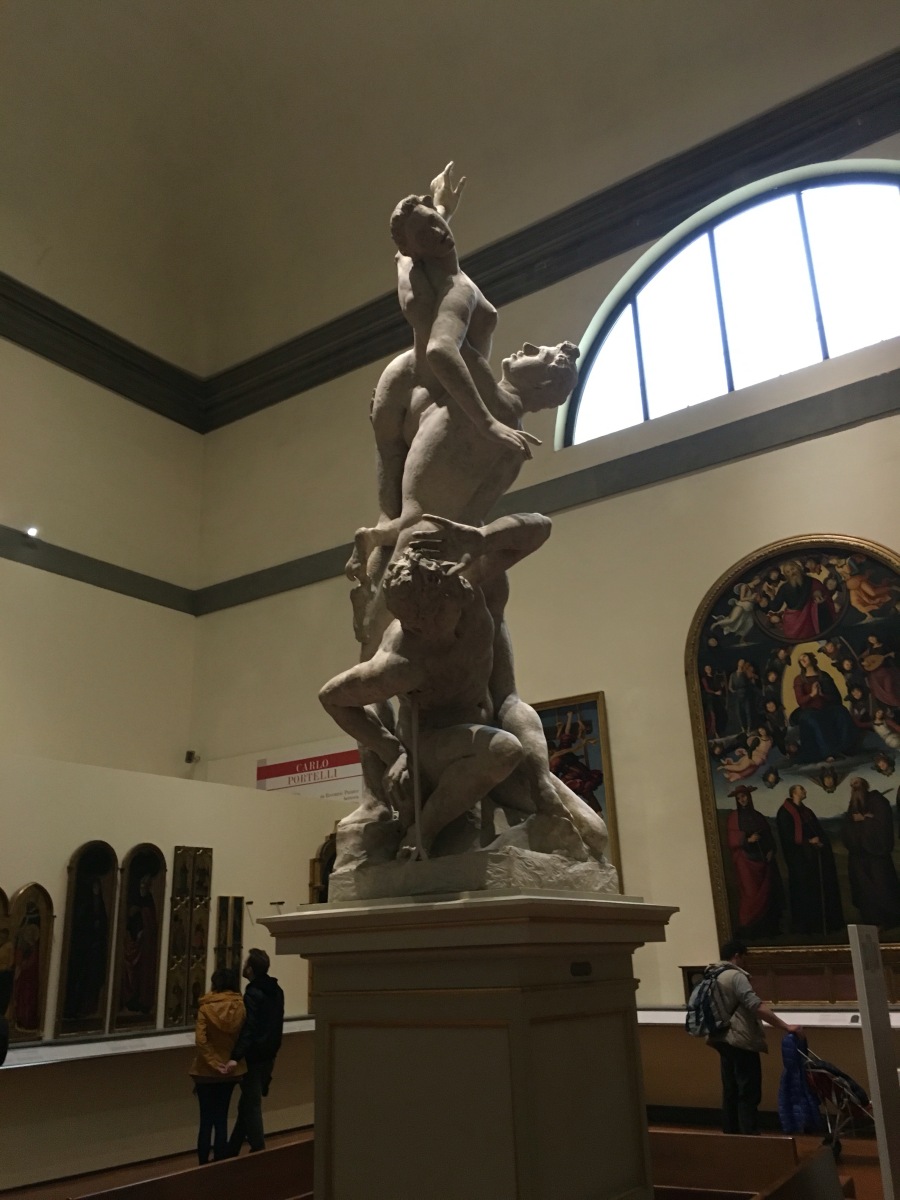 Just before The David is a lesser known and unfinished version of The Pieta.  I was reading one of the guide books and it was saying that the reason that Jesus’s body is so much bigger than the other two people is to show the weight of his death, that he truly died a painful and human death.

Then we got to The David.  You will notice that the right hand of David is larger than his left hand, this was done to show the hand of God protecting David.  Also, the slingshot is understated to show that God was the one who really fortified David and killed Goliath.  The statue is actually 17 feet tall, you wouldn’t know that just looking at pictures, but once you are standing next to him you realize how massive he really is!! 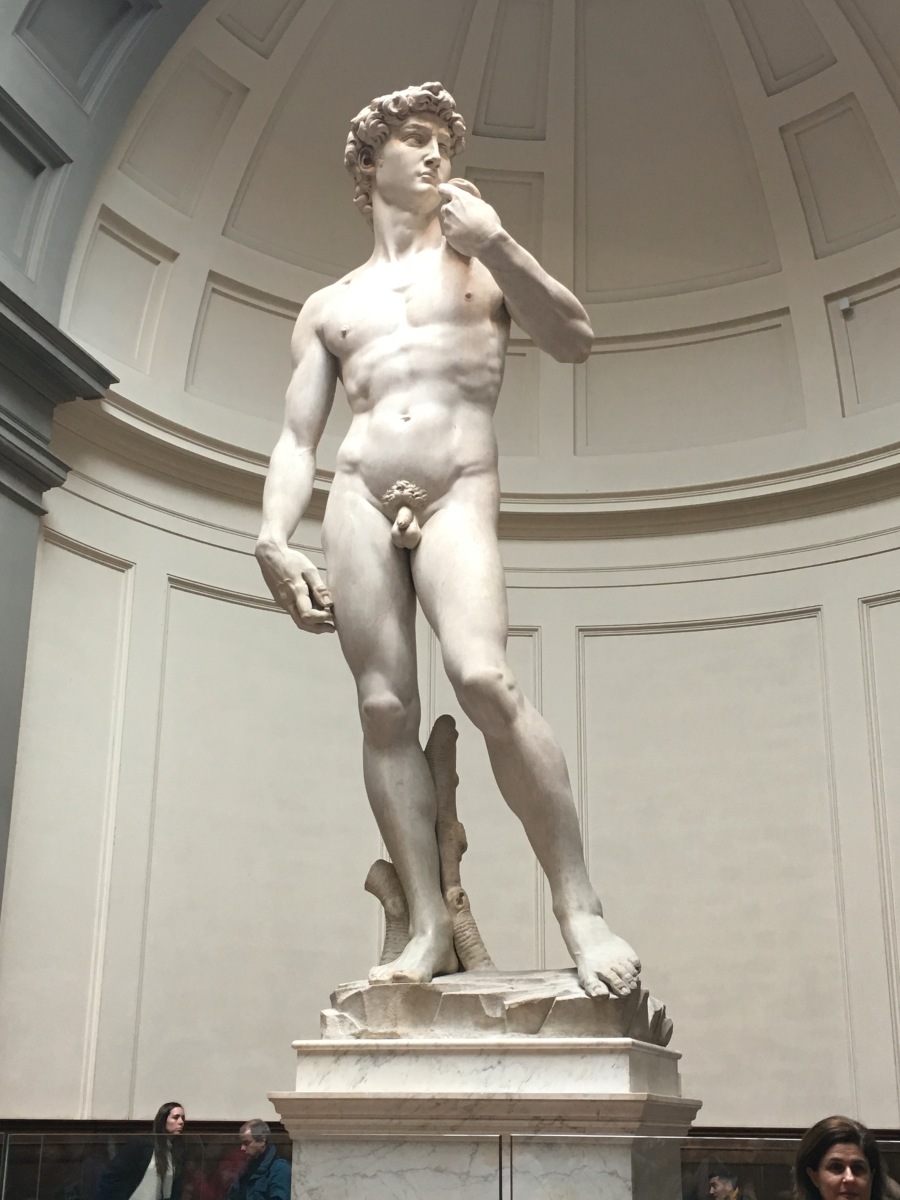 After walking around for a while we made our way across town to San Frediano in Cestello church where we met Jeremy, Jude and Leo.  Jeremy had found out they were going to be celebrating Mass in the Syro-Malabar Rite (which is an Eastern Catholic Rite of the Mass celebrated mainly in India.) It was quite the experience!  We still are not 100% sure what language they were speaking, but it was not English or Italian, I can tell you that for sure!! 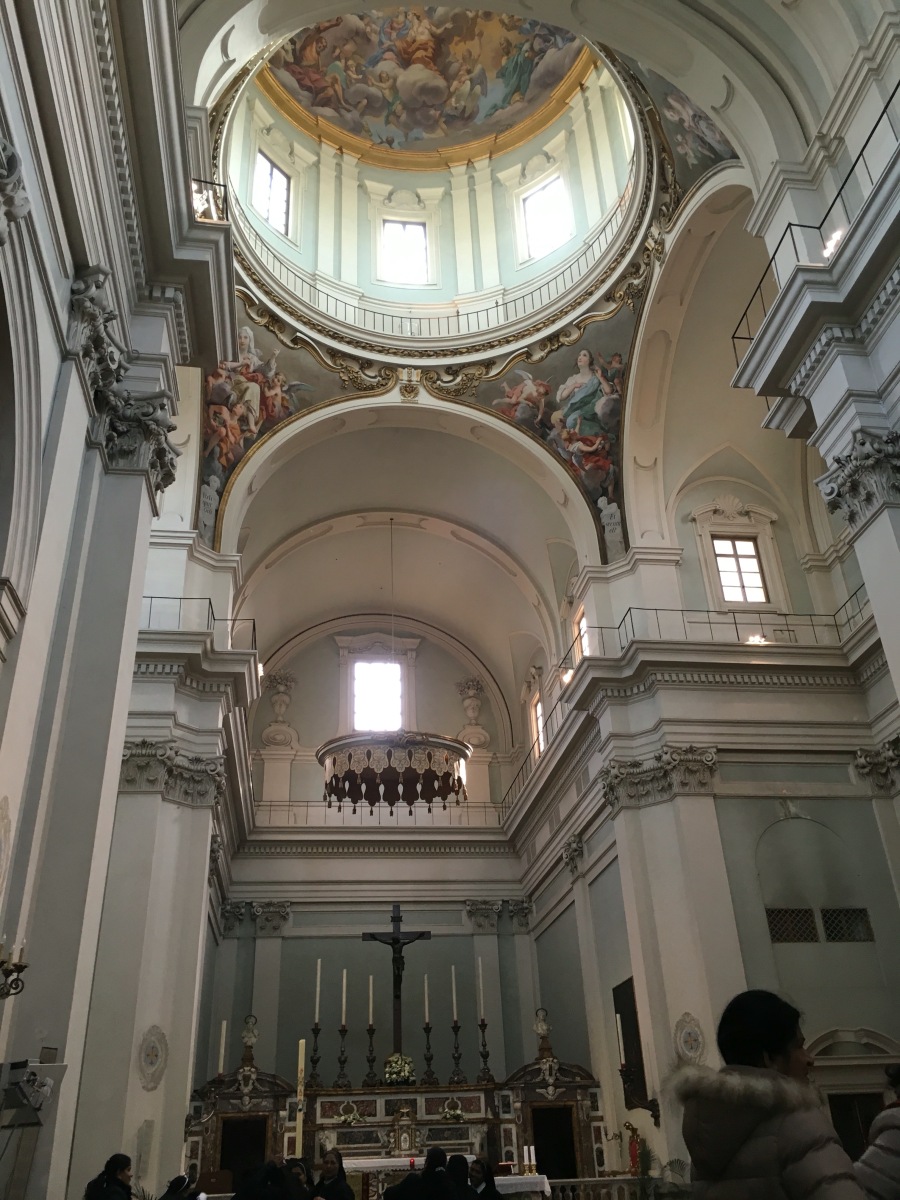 After Mass we stopped for gelato – we are still celebrating Easter after all!  Then we made our way back to the Villa.  We relaxed for about an hour and then went to dinner. I was really hungry and forgot to take pictures of my food, but we had a pasta with parmesan and butter cream sauce for our antipasto and then for the main course we had chicken, pork, and potatoes.

After dinner we had to say our goodbyes to the kids so they could get to bed, the family leaves tomorrow morning super early to go to Poland for a week!  We took a quick picture together (while we were taking that I realized I forgot to get a picture with Trevor in Rome…sad!)

From left to right: Jeremy, Lucy (on the shoulders), Leo (in front), Celina, Mary, Jude, Cathe, Genevieve (being held by Cathe) and myself.

It is 10:20 now and we are just getting everything packed up.  We leave tomorrow morning to make our way back to Milan to begin our journey home.  I cannot believe that this trip is already coming to a close, it feels like I just got here and now we are already leaving!  Guess that means it is time to start saving for my next European adventure!! (Or to buy a house – which could be an adventure of it’s own!!)

One thought on “Easter isn’t over!!”