We got up this morning around 7:00am and went over to the convent for Mass followed by a short time in Eucharistic Adoration. After Mass we went back to the cabaña for breakfast. We didn’t have much on the schedule for today so it was kind of a free day.

Sarah and Robbie went with Fr. Dan into Queretaro to run a few errands and Abby and I went to Fr. Jeremy’s theology class with the older girls. He was teaching them about the Bible and the difference between a normal book and a Bible and how we should treat it with respect because it is the word of God (palabras de Dios…told you my Spanish was getting better! 🙃)

After class Abby and I were planning to meet up with Madre Lumena and the little girls to go on a walk, but there was some miscommunication. We thought they had a half day of school because Madre told us to meet her at 12:00pm, well when we got into the car to start driving Dani stopped us because she had spoke to Madre this morning and it turns out the girls had a full day of school and they wouldn’t be going on their walk until later in the afternoon (like around 4:30pm or so). Well that kind of threw off our day (insert inspiration for title of post) and we just decided to wing it!

I had noticed that none of the classrooms had crucifixes and so I really wanted to try and find some to buy for the schools. So we asked Fr. Jeremy to drive us to the Basilica in Soriano because I knew there was a gift shop nearby. Fr. Jeremy had to get back to Santa Maria because he had to teach another class so he dropped us off and gave us some vague instructions on how to get to Casa de Jovenas, the instructions were “walk down this street for about a mile and a half and then start looking to your right. When you see the street with the big blow up bottles of Tequila you will turn right on that street and the house is on the left about 2 blocks down.” So armed with that Abby and I hopped out of the van and just started laughing!

The Basilica has a really pretty garden next to it and so while we were waiting for the shop I wanted to go into to open we prayed a rosary. Well by the time we got done it was 12:15 and the shop still wasn’t open so we decided to go in the gift shop at the Basilica and look for the crucifixes there. We asked if he took US Dollars and he said no, so then we asked if he took credit card, still a no. So it wasn’t looking promising that I was going to get the crucifixes because I didn’t have any pesos. We decided to just start walking to Casa de Jovenas and we would figure out the crucifixes later. So we started walking when we came across an ATM Machine so I popped in and got some pesos and then we backtracked to the Basilica and I bought crucifixes with the medal of St. Benedict for each of the classrooms in the secondary school and the primary school.

With crucifixes in hand we again started our way to Casa de Jovenas. We were probably about three quarters of a mile into our trek when we heard a catcall from behind us and when we turned around sure enough Fr. Dan, Sarah and Robbie were driving up next to us. So we hopped in the car with them and we made our way to Casa de las Niñas. We made a pit stop into a local Church, I wasn’t able to get any photos because my hands were full with the bags from the crucifixes, but it was very pretty inside. From there we walked over to Casa de las Niñas and talked for a few minutes with Madre Lumena before driving back to San Jose.

On the way we asked Fr. Dan his thoughts on the Mexican road signs and he wasn’t any more help than Fr. Jeremy. He said the teepee could either designate that there are indigenous people or that it was a camp site…as soon as I have a chance I am looking up the signs so I can educate everyone on what they mean!

Fr. Dan dropped us off at San Jose at around 2:00, so we had about 30 minutes before the kids were let out of school. We spent some time in the chapel and then said our goodbyes to the little girls as they came out of school and the older girls as they came by on the bus to pick up the little girls. It was definitely very hard to say goodbye to them…it is strange we have been here for only a week, but it feels like much longer as we have formed connections with these kids who are so desperate for love and attention, and I am more than happy to give it!! We took a picture with the little girls before they got on the bus and we were cracking up because instead of saying “cheese” before the picture was taken, they say “whiskey!” Which I guess makes sense because if they said cheese they would actually be saying “queso” and I’m not sure that would invoke much of a smile! 😳

We then joined the little boys for lunch. We had a shrimp soup and then they brought around a “salad” of cilantro and avocado to put into the soup…it was delicious, but I forgot to take a picture of it, but I did get a picture of the boys at lunch.  One of the funniest things that happened this week was on our tour earlier in the week, Fr. Jeremy was showing us the dinning hall for the little boys and I am not sure if you can tell in the photo, but all the benches are lined with AstroTurf!  We told Fr. Jeremy that if he ever replaced it he could save the scraps for the current benches and make a mini putt putt course for the boys!

After lunch we went back to Santa Maria and had about an hour to relax. I spent some time reading and writing in my journal during this time. Then we went outside because the older boys were supposed to be getting done with work and were going to maybe play some “fútbol” (soccer) but they got let off work late so there was no one around to play. Abby and I went for a walk instead. We have been wanting to get all the way out to the oat fields to take a picture because we have driven past it a few times and it is just beautiful! 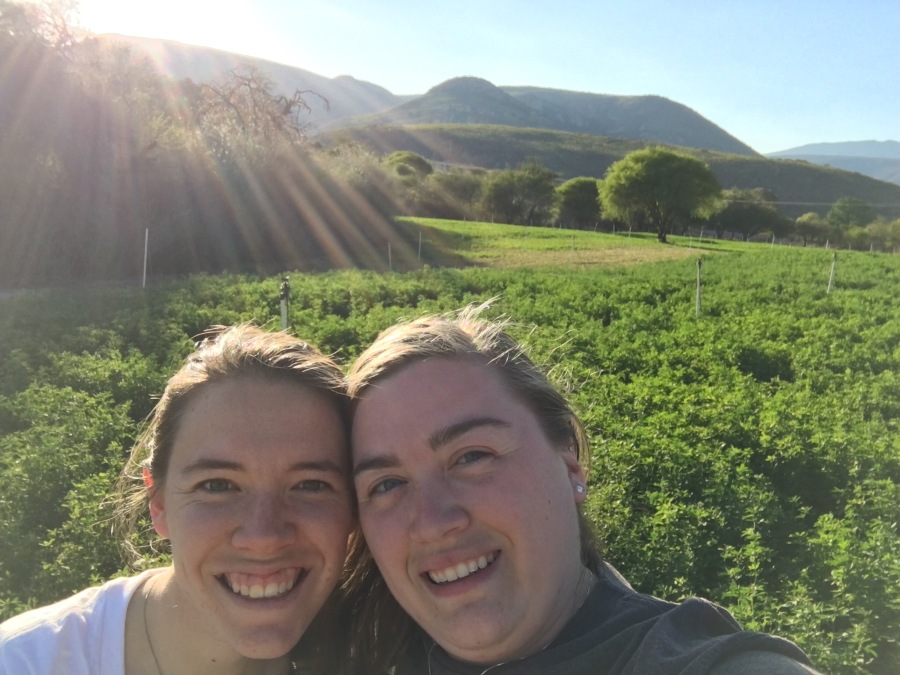 After our walk we met up with the older boys and did Stations of the Cross around the mission followed by dinner. After dinner the boys went to shower and get cleaned up and we came back to the cabaña to get packed. It seems like we just got here and now it is already time to go home, the week has definitely flown by!!

At 9:00pm we made our way back over to the Chapel for adoration. Once a month the boys have what is called “Adoracion de nocturna” (which is essentially all night adoration). Abby and I went over for the first hour, which was great! The little boys also came down and so we got to sit with them. I should note, there are two dogs that are on the property, they tend to stick around the little boys and wherever they go, the dogs go as well. Well, tonight that meant that the dogs came to adoration! That was definitely a first for me, adoring our Lord and having a dog lying at my feet…only in Mexico!

After adoration we met up with Fr. Jeremy to figure out the game plan for tomorrow and then it was time to go to bed!